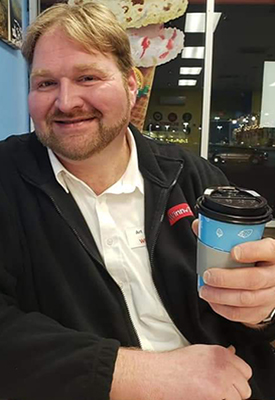 Arturo Walter Arteaga Jr.,39 was born on December 17, 1981, in Gainesville, Florida. He was 6 ft 6”, 300 + lbs. although he was a large man, he was one of the kindest and gentlest men you would ever meet. He strived to help people and make as many people happy as he could, he was good at it even if it meant he would do without. He loved to make people laugh, he was always the life of the party. Since Arturo was young kid he enjoyed video games The Legend of Zelda, Halo and Mortal kombat were some of his favorite game series he played into adulthood. He was also tech savy, he would build his own computers by piecing together parts from other computers. He enjoyed music from bands such as 311, Greenday, Creed and Metallica. He absolutely loved and adored his friends and family especially his parents, he always found time to help his Mom and Dad with whatever they needed. There were two of the most important people in his life.

Arturo was the oldest of three and the most caring who was willing to give his time to his brothers. For example, teaching them how to ride a bike as kids or being there to listen to problems and give advice as adults. He was a very proud Uncle of his Nephew Elias and Niece Isla (Eye-la). He loved to spoil them buying them games, clothes, toys and pretty much anything they wanted, he loved them so much. He also had a love for Star Wars.

A Celebration of Life Service

Love you Artie! You will be missed so much!! I’ll miss your big bear hugs 😭😭

I love you so much going to miss hearing your voice when I come to Winn Dixie hi aunt Karen and the hug you give me and tell me you love me. You was to young and sweet to go yet!

Art you are missed beyond words.its not the same there I find myself forgetting you aren’t here anymore and I keep looking for you to walk through that door or on tag day asking me to hang those up for you right by the registers ..or just simply talking you would always ask me how zac was doing and you would always share your snack cakes with him ..
I will never forget the time when I first started and u and Tiffany both said happy birthday over the pa system ..your memory will live on within the walls of winndixie you are loved and missed big guy ..Rip

You will forever be missed.your memory will live on within the Winn-Dixie family You were a great person and friend

i’m really going to miss you art. i remember closing winn dixie with you almost every night and youd always get on to me for being on my phone and i’d always say “what if i’m texting a cute boy” and you’d always say “caitlyn we both know you’re not”. you were always there for me no matter what i needed whether it be advice or if i just needed to vent to someone. thank you for always listening to my dumb boy problems and my rants about school. thank you for always telling me how proud you were of me even when i messed up and thought it was the end of the world. you always made sure i knew that even if i messed up i could always pick up where i left off and start again and things would be fine. i’m sorry i didn’t come see you when i quit. i wish i would have. i thought about you a lot whenever some minor inconvenience would happen and id always remember all the advice you would tell me. i’m really going to miss you art. i love you art.

Wow. Can’t believe you’re gone. One of my biggest memories of you were you telling me and your Aunt Amy that one day you were going to open up a Lasagna Hut restaurant. Miss you.

Artie, I always enjoyed your calm demeanor. Thank you for being kind. We need more people like you.

I am so sorry to see this on Artie! He was a sweet guy and always made me laugh at work and off the job. God speed my friend. 🌹🌹🌹

Art you will be missed very much. RIP buddy……

So sorry to hear of Art’s passing. I remember he & his father coming to the bank and seeing Art at Winn Dixie. He was always so friendly and always willing to help in any way he could. He will be missed. My prayers of peace and comfort to his loved ones.