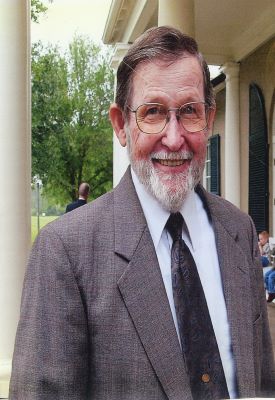 Acy Eugene Folsom, age 85, died Wednesday, September 15th at
home following a courageous battle with cancer that lasted over
twelve years. He was born in Adel, Georgia.
Acy was predeceased by his parents Acy Clifford and Lula Mae
Folsom, his son Clifford Lee Folsom; brother John Henry Folsom;
sisters Laverne Giddons, Blanche Smith, and Odelle Pope.
Acy is survived by his loving wife, Barbara of 64 years, two
daughters Kathy (Robert) Thomas, Kim (Keith) Wilson; six
grandchildren; Lee Folsom, Adam Peterson, Robbie Thomas,
Nick Peterson, Sara Thomas, Josh Peterson and numerous great
grandchildren.
Acy was a member of the United States Air Force for twenty
years. He served in Korea, Hurlburt Field, France, and went back
to Eglin where he made Okaloosa County his and his family’s
home. He also was a charter educator at Bay Area Vocational
Technical School in Fort Walton for twenty two years. He taught
Marine and Small Engine Mechanics. After retirement he opened
“Acy’s Fix-it” until health forced him to retire for the third time.
Acy was a member of New Bethel United Methodist Church
where served on many committees. He loved both his family and
his church family.
The funeral service will be held at New Bethel United Methodist
Church Saturday September 18th at 11:00 A.M. The family will
start receiving friends at 10:00 A.M. Interment will follow at Old
Bethel Cemetery. Arrangements are by Brackney Funeral Home.

Express your condolences with flowers sent to Acy Eugene Folsom

Barbara and Family,
Our condolences and prayers are with you. Acy was Dennis first boss at Eglin. Acy was part of our wedding party. We think of you and Kathy & Kim as family.
We know that Acy is in a better place and no pain.
Dennis and Julie Thibeau

Barbara,
My deepest condolences for the passing of Mr. Acy. I pray that you will be able to take this time with your family and loved ones to reflect, grieve and celebrate his life. You are always in my heart.
Love,
Ashli

Barbara so sorry to hear about Acy. Please know I’m praying for you and your family.
John and Sherri Symons

Barbara, I was so sad to hear about Acy. I know what you are feeling and want you to know that things will get better with time. Like my Jim, Acy is not in pain and with the Lord. Keeping you in my prayers.

Mrs. Barbara, Kim, and Family,
May the care, concern, and love of those around you provide comfort and peace to get you through the days ahead. Our most sincere condolences to your family. We pray that our Lord brings you and your family the much-needed peace during this sad time. We are sending love, thoughts, and prayers to you all.

Acy was a fine Christian man. What a wonderful example of a father, husband and friend. He will be greatly missed. Gary and I were so blessed to have him as a friend and part of our church family. We are praying God’s comfort and peace for Barbara and all the family. With our love and prayers, Gary and Pam

Barbara, so sorry to hear of Macy’s passing. Our prayers are with you and your family knowing Acy is free of the cancer and is now with the Lord. Please accept our condolences.
Karen and Allan Hansen

I was deeply sorry to hear that Acy has passed away, Barbara. You and your family are in my prayers. I’m sorry I am out of town and will not be able to be at the service. God bless you all.

Barbara, I met you at Margie’s and you were always so helpful and friendly. Please know that my prayers are with you and your family at this time. June Easterwood

Mrs Barbara, I’m very saddened by the passing of Mr Folsom I will surely missed him driving you to the Salon to have your hair done . He will be missed by many. May GOD BLESSED YOU AND COMFORT YOU DURING THIS DIFFICULT TIME. Lusita and Joe Ryba

Barbara, So sorry for our loss.

So very sorry to hear of your husband’s passing. My deepest condolences.

Dear Barbara and family
Acey had lots of love in his life. I know you will miss him a lot. Hold your head up and smile because you know he is thinking of you too. Love you, Kathyb