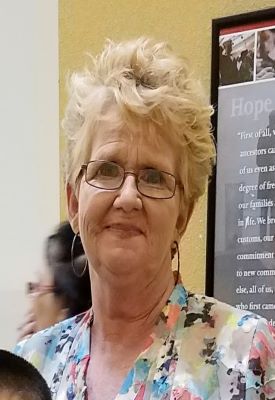 Barbara Ann Lawson, age 68, of Baker, Florida, went to be with her Heavenly Father on Thursday, August 26, 2021. She was born on December 15, 1952, to Ray and Eola Lawson. Barbara was a lifelong resident of Baker, where she worked as a cook for over 40 years. She was well known for her famous homestyle cooking, especially for her “cathead” biscuits and cole slaw.  She was a selfless and caring daughter, Mother, “Grannie”, Sister, Companion, Aunt and Friend. Her grandboys were her heart. Barbara is a member of the Rock Creek Assembly of God.

She was preceded in death by her father, Ray Lawson

Survivors include her mother Eola Lawson

A Celebration of her Life, will be held at 6:00PM, Thursday, September 2, from the Chapel of Brackney Funeral Service, with Pastor David Elliott officiating.

You may share memories and offer condolences at http://www.brackneyfuneralservice.com

Express your condolences with flowers sent to Barbara Ann Lawson

A beautiful lady ,A Godley woman that touched so many lives. Barbara you will be missed ! Prayers to all the Family ,Friends . May God give you strength and comfort during this time.

Praying for the family. So thankful to have known this beautiful and Godly lady. We will miss you but rest in the assurance we will see you again ❤

A GODLY LADY AND THE BEST OF FREINDS WHO WILL BE MISSED BY ALL THAT KNEW HER. SHE LOVED HER CHILDREN, GRANDCHILDREN AND FAMILY. ONE OF THE BEST COOKS EVER. SHE WORKED HARD HER ENTIRE LIFE TO TAKE CARE OF HER FAMILY AND AS A DISTANT RELATIVE I LOVED HER AND WILL MISS HER. PRAYERS GO OUT TO HER CHILDREN.

As a much loved cousin Barbara will be missed by me and my family. My thoughts and prayers are with her family, Barbara’s faith was apparent and I know that has to bring comfort to them. I love you all.
Juanita & family

Though we didn’t see one another except at Family Reunions or, occasions such as this, I knew she loved me, and she knew I loved her. We never let it go unsaid . Barbara my beautiful, thoughtful, sweet cousin, will be missed greatly by her family, and all the Lawson clan. She’s with our loved ones, those that as she, have left us to soon. We grieve our loss, but we find comfort in knowing, she’s with the Father.

I’ll never forget those wonderful buttermilk biscuits she cooked at Mickey’. Such a sweet person.

I am so sorry to hear of Barbara’s passing. My love and prayers to Aunt Eola and the rest of the family.

In this sorrowful time, we would like to extend to you our heartfelt condolences. May our lord comfort you and your loved ones. God bless

We are so sorry for your loss! We will be praying for your family in the days ahead!

A sweet lifelong friend who always had a smile on her face! You will be missed I am certain Barb. Go Rest High!!!

What a wonderful lady she was. We had so many laughs at Mickeys. Yes I loved her biscuits! She taught me how to make her Cole slaw dressing. I’ll bet she found Al and gave him a big hug! We will all be together again very soon. Make sure you are ready for we never know when it will be. ❤️ Prayers for the entire family.

Such a lovely woman Mother and friend gone way too soon.
Many prayers and love sent.
She was beautiful on the inside and out.
Condolences and Love ❤

Prayers to all, Barbara was a friendly cousin that will be missed by many.

To our sweet niece

Those special memories of you will always bring a smile.
If only we could sit and talk again about your grandkids and your chicken dumplings like we did on July 2020. That was the last time I gave you hug.
Rest In Peace until we meet again. ❤️

We will forever remember her smile, her giving heart for all, her beautiful personality! Barbara Rest N Peace! The Hawkins Family will never forget your LOVE you gave us!

So sorry to hear of Barbara’s passing !! She was one of my late wife Janet’s cousins that we always held dear to our hearts !! A wonderful lady and an amazing cook !! I remember Janet would prank call her at the restaurant to see what she was cooking and ask about the daily menu specials, then place an order for delivery to Alaska, lol !! Barbara always got a kick out of that !! She will be missed dearly !! Rest In Peace !! 🕊💕💐🙏✝️🙏💐💕🕊

Prayers to her family and loved ones !!

The most selfless, caring, putting everyone else first.. The STRONGEST Woman I knew I was PROUD to call my MOM..She loved my brother and I with all she had, she worked hard her whole life to make sure we had what we needed..She loved her grandsons with her whole heart and soul..She always made sure we all was taken care of. Words cannot even begin to describe how I am feeling and how I will go on without her here. I know my mom isn’t hurting any longer and she is looking upon her Heavenly Father’s face. I LOVE YOU MOM! Love, YOUR BABY GIRL! 💜