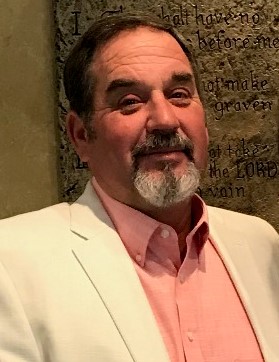 Dennis was born on August 20, 1958 to the late Dewey Elvin “Cuz” and Clara Mae
“Missy” Fowler. He was raised in Pace, FL and resided there most of his life before
moving to Baker eleven years ago.
Although he was of short stature, Dennis had the biggest heart in the world. He was
kind, soft spoken, tender hearted, and overﬂowing with love. He never met a stranger
and he spread the love of Jesus to everyone he met. Dennis was a family man. He
loved his wife, his daughters, and his grandchildren more than anything in this world.
He was the handyman of all handymen. If something was broken, he could and would
ﬁx it. He owned his own paint and body shop for many years but recently worked as a
foreman at Carpenters Campers in Pensacola. Nothing was too hard for Dennis.
He faced hard times throughout his life but his faith in Jesus was unwavering and
steadfast. He was a true example of a strong man of God. Dennis was raised in Pace
Assembly of God Church where he was a member and served on their media team for
many years. Once he moved to Baker, he became a member of Milligan Assembly of
God Church where he has served in ministry for over ten years.
Dennis is preceded in death by his parents, Elvin and Clara Mae Fowler; his ﬁrst wife, Carmen Fowler; his son in law, Joe Nelson.
He is survived by his loving wife, Sheila Fowler; two daughters, Heidi Nelson and
Deidre Rhodes, and husband James; ﬁve grandchildren, Lucas and Darcy Nelson and
Addison, Colt, and Jack Rhodes; ﬁve siblings, Martha Murphy and husband, Mike,
Dewey Fowler and wife, Myra, Sandra Fowler, Cathy Sanders and husband, Tony, Rese
Moore and husband, Tommy; two sisters in law, Trina Goraum and Linda Ethridge; two
brothers in law, Glenn Adams and wife, Kim, and Jimmy Adams and wife, Martha;
nineteen nieces and nephews; a host of great nieces and nephews, cousins, family,
and friends.
The family will receive ﬂowers or you can donate to Milligan Assembly of God Building Fund.
Funeral service will be held Wednesday, August 11, 2021, beginning at 2:30pm, at Milligan Assembly of God, with Pastor Mike White and Pastor Jesse Jernigan officiating. Burial to follow at Elizabeth Chapel Cemetery in Chumuckla Florida. The family will receive friends Wednesday, August 11, 2021 from 1:30pm – 2:30pm at Milligan Assembly of God.
You may leave your condolences at www.brackneyfuneralservice.com

Sheila, I am so saddened to hear of your loss. I am lifting up prayers for you and all of your family during this difficult time. I know that God will bring you peace and comfort in the coming days.

Sheila, Heidi, Deidre and Families,
We were so sorry to learn of the passing of your dear loved one, Dennis.
There are no words that can be said that will ease the pain of your loss.
Your loss will leave an emptiness that will linger a long time. May you
find comfort in knowing that there are family and friends who care deeply
about your loss and that you all are in their thoughts and prayers.
May God Bless you all.
Ivan and Renate Plant, Joe and Patsy Plant, Kenny and Liz Plant

So sorry for the loss of a great friend and brother in Christ we loved him so much. Prayer and Hugs for the entire family we are sorry that we are unable to be there due to out of town prior commitment. Don’t hesitate to let us know if you need us. Craig and Carol Abel

Dear Sweet Sheila & Family,
Please accept our deepest condolences & sympathy & love to you all during the loss of Bro. Dennis. God is truly “Gathering In” His Saints l ( ( like the hymn we sang). Yes, He is gathering in His Redeemed in these Biblical times we are living in. Saints we know locally and all over the country are falling out, hearts are failing, new diseases are being unleashed like never before. Praise God for yours and Dennis’s Testimony and the beautiful love you shared. He always looked at you with a glow of true love. We were st Milligan when ya’ll married. Both of. You always looked so happy. We are praying for you as you go on with your walk for Christ until he joins you together again. If we can ever help you in any way, please let us know. We love you & are praying for you.