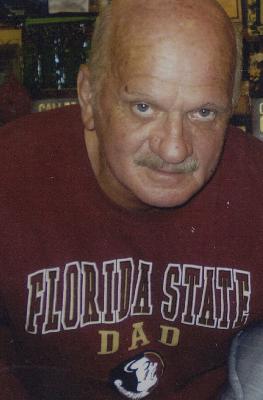 On Sunday, September 27, 2020, Dewey Ronald Kolb, Ronald to all who knew him, loving father of two wonderful children and one perfect child went to be with the Lord.
Ronald was born on November 16, 1946 in St. Augustine, FL to George and Edna (Jordan) Kolb. He attended Crestview High School playing football for the bulldogs. He served in the Vietnam War earning two bronze stars. On returning from the Army, he attended the University of West Florida receiving a BA in Social Work in 1976.
Ronald had a passion for serving others which he expressed by his vocation as a Social Worker and later as a Drug Counselor. He also was a long-time volunteer youth football coach with several championship seasons. As all who knew him can attest, he could successfully grow any type of plant and raise any type of animal. His children grew up surrounded by squirrels, snakes, raccoons and especially birds. There were pheasants, Emus, ducks, pigeons, geese, turkeys, peacocks and especially chickens. He refused to eat any of these birds stating that he was not a cannibal. Along with these interests Ronald had a burning passion for the Florida State Seminoles thus showing his superior intelligence in comparison to his brother, Kenneth. Miami? Really?
Ronald was preceded in death by his father, George, his mother, Edna and nephews, Randall Kolb and Greg Carrell. He is survived by one brother, Kenneth (and Cheryl) Kolb, two sisters, Shelia (and Steve) Carrell and Anita (and Chuck) Beets, Three Children, Jeramey (and Emily) Kolb, Mandy Kolb and Eric Kolb, Three grandchildren Nicholas Mattingly, Colin Ball and Jakob Kolb and one great grandchild Mayson Mattingly.
The funeral service will be held at on Friday, October 2, 2020 at Brackney Funeral Home at noon. Visitation will be for one hour prior to the service. Interment will follow at Antioch Baptist Church. Flowers may be sent to Brackney Funeral Home.
You may leave your condolences at www.brackneyfuneralservice.com

Sorry to hear of Ron’s passing. He was excellent with children and I enjoyed the time we worked together years ago. Our thoughts & prayers are with the family.