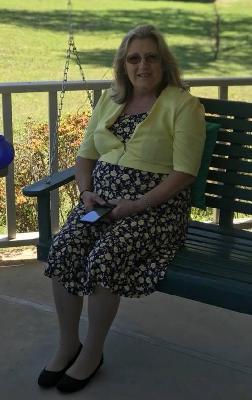 Doris Marie Reiling age 65 of Crestview passed away Wednesday, January 13, 2021. She was born in New Orleans, LA on May 25,1955 and moved here in 1972 from Pensacola. She lived most of her life in NW Florida.
Doris was a quality Assurance Inspector for many years retiring from BAE. She was a member of Southside Baptist Church where she was baptized on March 20, 1995. She was a homemaker, loved gardening and spending time with her family and grandkids. She spoiled her four-legged friend and companion. Doris attended Tate High School in Pensacola.

Doris is preceded in death by her mother and father Nelson Firmin SR and Nora Firmin, one brother Elton Firmin and one sister Patricia Penton.

Funeral services will be held Monday, January 18, 2021 at 11:00AM from the Chapel of Brackney Funeral Service with Pastor Jason Stokes officiating. The family will receive friends one hour prior to the service.

We are here, mourning with you. It is a great loss. And I know she was well loved by so many. She always reminded me so much of Dad with her gentle and quiet spirit. I pray that your grief may be tempered with the assurance that she is in her Heavenly home. And I know Michelle was so glad to see her and share the image of Our Lord fully with her. We love you, Brenda (Firmin) Lamey and Family

My dear sister….my heart is so broken right now. I canâ€™t believe you are gone. I know youâ€™re with Jesus, and Iâ€™ll see you one day, but this is heartbreaking! I know I would kid about how we always had to have 1 birthday party for the both of us as kids…and even sometimes as we grew up. But, I hope you knew how proud I was to share our special days together. May 25th and May 26th were the best because we got to share them. It wonâ€™t be the same from now on….I will miss that.
I will miss you…..forever. I hope you knew how much you meant to me and how much I love you!

Tony,sorry to hear about the loss of your wife. My thoughts and prayers go out to you and your daughters.

Dearest sister Doris,
Tears fill my eyes, my heart â¤ is broken ðŸ’”. This is not our home we are all just passing through, I praise Jesus we will see each other again one day in Our Heavenly home for all eternity. Love and miss you always.
Your little sister,
Dolly Ann

Jenene, Sean and Family,
We are so sorry for your loss. Please know that you are all in our thoughts and prayers.
Much love,
Ted & Shannon

So sorry for your loss prayers for you all.

So sorry for your loss. Would have been there to support you but did not find out until tonight from Heather. Prayers and thoughts are with you.

Uncle Tony, Jenene, Darlene, and family so sorry for your loss. Prayers and thoughts are with you! ~ Love Tina!