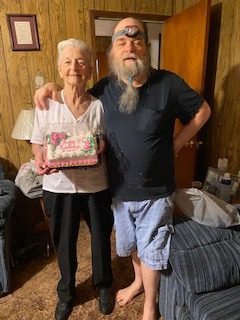 Eddie Joe Day, 58 of Crestview, Florida passed away Monday, June 27, 2022. Mr. Day was born on December 25, 1963, in Crestview, Florida to James and Hazel Day. Eddie was a lifelong resident of Okaloosa County and was a long-distance truck driver.

Not many people knew the sacrifices that Eddie made because of the love he had for his mother and his family. He had a journey and that was to take care of his mother, Hazel. Eddie always made sure his mom called his sister on her birthday and they would sing the birthday song all the way through. He was always such a loving and kind person he would give anyone his last dime he had.

Funeral service will be held on Tuesday, July 5, 2022, beginning at 11:00 am from the Chapel of Brackney Funeral Service with Bob McNeil and Brian Bates officiating. Burial to follow at Live Oak Park Memorial Cemetery in Crestview, Florida. The family will receive friends Tuesday, July 5, 2022, from 10-11am at the funeral home.

Express your condolences with flowers sent to Eddie Joe Day

My heart hurts to my soul over the loss of my brother. He loved and cared about his family so much. Him and momma both helped me raise both of my children. Eddie was always present in their lives when their fathers weren’t. It’s true that Eddie would give you his last penny if you needed it. God knows the sacrifices Eddie has made. And if I would just attempt to thank him for everything he did for me and momma he would ALWAYS say “you can thank God for that. I love you momma and Eddie and I will see you one day in one of the many mansions God has prepared for us.

As I sit here before putting my mother and brother to rest .I want everyone to know how much my mother loved Eddie and how much Eddie loved our mother.Monetary things didn’t matter to him.Our mothers well being did.He spent the majority of his life carrying for her.He loved his family ❤. Everyone knew my mom while Eddie sat in the shadows taking care of her.He had a journey like I said in his obituary. He loved his family. He just couldn’t bear for her to go without her.I was worried about his salvation when the pastor said that God knew what was in his heart and rest assured he was in heaven with my mom.The sacrifice s he made throughout his life was to take care of our mom.You my brother will never be forgotten but we wanted you to stay with us.Now you both can rest until we see you again. You Jimmy,Daddy,Mama and you.You have your crown sweetheart 💕. It’s yours because of your selfless love you had for our family. I am so heartbroken 💔. But I know that you are in a better place. Forever indebted to you for the love of our family.

To my family and friends.
I wish to sincerely express my condolences. I knew uncle Eddie all my life and I will surely miss him, his smile and sense of humor. He was always good to me and treated me with love. Uncle Eddie, I love and miss you. Till we meet again I hold you in my heart.

I’m shocked to hear of Eddie’s passing. I met him years ago and he was such a character and kept everyone laughing. RIP Eddie.