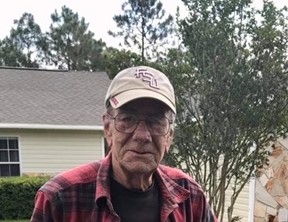 Elwood Lamar Wilkinson, 72, of Holt, Florida, passed away August 5th, 2020, at home with his significant other of 21 years, Kathleen Grice.
He was born July 27th, 1948, in Milligan, Florida, the son of the late Troy Lamar Wilkinson and Margaret Howell Wilkinson. He was the oldest of three siblings.
Elwood graduated Baker High School in 1966, and went on to serve in the U.S. Army as a Nike Hercules Missile technician in the early 1970s. After his honorable discharge, Elwood founded the Wilkinson Construction company and served the community of Northwest Florida in the building trade until he retired in 2006.
Elwood spent his remaining years doing what he loved most, sitting at Retreat Inlet on Yellow River talking with friends, fishing, and enjoying the outdoors.
He is survived by his significant other Kathleen Grice of Holt, Florida; children, daughter and son-in-law Melissa and Mike Reynolds of Modesto, California; daughter Rebecca Wilkinson Carlson of Charlotte, North Carolina; son and daughter-in-law Troy and Shannon Wilkinson of Las Vegas, Nevada; daughter and son-in-law Mary and Mark Bagby of Hagerstown, Maryland; son Joseph Wilkinson of Las Vegas, Nevada; daughter and son-in-law Anne and Stephen Rouzer of Urbana, Maryland; grandchildren, Zachary Morrison of Pensacola, Florida; Hailey Carlson of Santa Fe, New Mexico; Jonathan Carlson of Charlotte, North Carolina; Mackenzie, Kayleigh, and Abigail Wilkinson of Las Vegas, Nevada; Charlotte Bagby of Hagerstown, Maryland; and Anderson Rouzer of Urbana, Maryland; brother Johnny W. Wilkinson of Milligan, Florida; sister Brenda Wilkinson Williams of Wing, Alabama; and ex-wife Diane Marie Wilkinson of Hagerstown, Maryland.
Services will be held Monday August 10th at the Chapel of Brackney Funeral Service beginning at 4pm and the family will receive friends one hour prior. A burial to follow at Wilkinson Bagget Cemetery.
You may leave your condolences at brackneyfuneralservice.com
Brackney Funeral Service Crestview is entrusted with arrangements.

My prayers are with you all. Elwood and I had a lot of good talks over the years on all the families and history. He can rest with the Angels. Bless you all.

Thank you all for your prayers and condolences. Dad was a true Floridian and did not spend more than a week away from Milligan/Holt since getting out of the Army in 1971.

He loved that place more than I can express. I’m so thankful that he lived such a long and blessed life and had the opportunity to enjoy much of Yellow river after retiring.

Thank you all for your love and kindness to our family. God Bless!