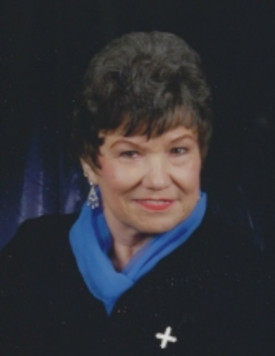 Frieda Lea Haley, age 79, of Crestview Fl, went into the arms of our Lord, Jesus Christ, Monday, November 22, 2021, in her home from natural causes.
She was born in the Republic of Panama and grew up in the Canal Zone. The heat of an Alabama summer was a great shock to her when she moved to the United States as a teenager. Her family then moved to Pensacola, Fl. where she graduated from Escambia High School. She later attended Perdue university then took a break from her education to raise a family. She had an early career in bookkeeping and accounting. After graduating from the University of Alabama Huntsville she became a cost analyst for government contracts until she retired. She loved her children and she loved God. She was a member of the Church of the Epiphany Episcopal church in Crestview, Florida where she served God as a Lay Eucharistic Minister, a member of The Order of the Daughters of the King, and sang in the choir. She was proud of her canned vegetables, especially the tomatoes and some of her favorite things were hummingbirds and cats. She always had a cat or two when we were growing up and until, like she used to always said when we were talking on the phone, “Bye-bye now”.
Frieda was preceded in death by her mother Marion D. Fleming, her father Luther U. Fleming, birth father Major Paul A. Lobingier, and her grandson Sgt Andrew J. Davis.
Left to cherish her memory is her sister, Linda S. Fleming; children, William (Bill) M. Stikes with Alexandra Stikes; Karen S. Doran with husband Vincent R. Doran; and Kevin C. Stikes with wife Helen L. Stikes. Grandchildren, Anthony (Tony) Stikes; Shane with wife Abby Doran; Keegan Doran, Sgt. Ryan Doran, and Leah with Nathan Davis; Christopher (Chris) Davis; and Casey Davis. Five Great-grandchildren, Devin, Cash, Annabella, Owen, and Harrison.
Services Celebrating her Life will be held on Saturday, November 27, 2021, at 3:00 PM at the Church of the Epiphany Episcopal church in Crestview, Florida. Reception following services.
In liew of flowers please send any donations to: WWW.exodosministries.com or His way 5825 Shields Rd. Huntsville, Al 35811 or P.A.W.S