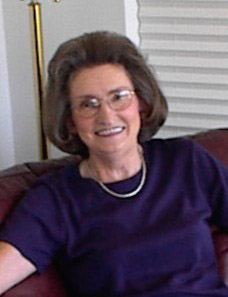 She was a loving wife, mother, and grandma to her family. She worked for GE at Eglin Air Force Base prior to becoming a devoted mother and homemaker. After her girls were grown she began working for the U. S. Postal Service in Crestview, where she retired in 2004. Hattie enjoyed sixty-two and a half years of marriage to her husband Randy. Some of her favorite past times were shopping, sewing, eating lunch out, and doting on her grandchildren.

Hattie is preceded in death by her parents, brothers Harlon and Top Hightower, and sisters Hilda Mullen, Helen Syfrett, and Kitty Crosby.

Hattie is survived by her loving husband Randy Gilmore, her daughters, Elizabeth Walthall of Crestview, Florida and Kimberly Gilmore of Fort Walton Beach, Florida, and two precious grandchildren, Annie Walthall and fiancÃ© Harrison Jones of Dothan, Alabama and Austin Walthall and wife Emily of Auburn, Alabama. She is also survived by her brother, Bob Hightower of Vernon, Florida, several cousins, nieces, nephews, and many friends.

In accordance with Hattieâ€™s wishes she will be cremated with a celebration of life service to be held at a later time. Flowers are being accepted as well as donations to the American Heart Association. You may go online to view obituaries, offer condolences, and sign guest book at www.brackneyfuneralservice.com. Brackney Funeral Services is entrusted with the arrangements.

Kim and family.
We are sorry to hear of your Moms passing. Our thoughts and prayers are with you. She was a lovely lady

Randy
We’re so sorry. You are in our thoughts and prayers.

Beth,
So sorry for your loss of your mother thoughts and prayers with you Annie and Austin

Mr. Gilmore, my thoughts and prayers are with you and your family during this very difficult time.

I have known Hattie off and on over the years, but our time working together as a Rural Letter Carriers at the Crestview Post Office was super. She was sweet, caring person to one and all. There are many who will miss her and mourn her death. Frances Martin

Gilmore family, I’m so sad to hear of Mrs. Hattie’s passing. I’m gonna miss her, such a sweetheart. Praying for comfort for all of you.