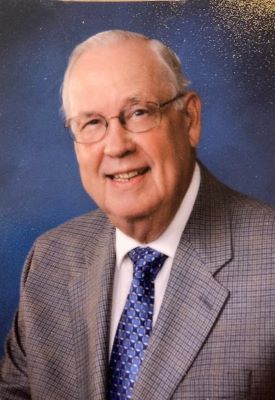 Hugh Douglas Wright of Baker, FL was born June 19, 1932, and grew up in Owosso, MI.  He graduated from Kettering University, formerly General Motors Institute in 1954.  At GMI he was a member of Alpha Gamma Upsilon fraternity, now Phi Gamma Delta and Tau Beta Pi an engineering honor society.

Mr. Wright worked as a Staff Project Engineer at General Motors until 1965. His many projects were printed circuits & electroluminescent light applied to instrument clusters.  He received a patent for the application for electroluminescent light. A fun project was developing unique instrumentation for GM’s concept vehicle, Firebird, a jet engine sedan.  In 1965 he joined Ford Motor Company as a supervisor.  This was followed by manager, executive engineer and business planning and sales manager. Hugh spent four years in Europe as Director of Electronics Operations, Ford of Europe.  During this time he gained approval and built an engineering building in support of electronic operations.  Hugh retired in 1988.

Hugh married Mardi in 1954 and was blessed with a daughter Denise and two sons, David and Douglas.

Hugh and Cheri were married in 1979 and lived in Ann Arbor Michigan.  They lived in Brentwood, England from 1984 to 1988.  In 1989 they moved to Gulfport, FL.  They summered at Rennie Lake in Northern Michigan.  Hugh was a member of the SAE (Society of Automotive Engineers), a charter member of the University of Michigan Victors Club, a member of Pasadena Yacht and Country Club, St Petersburg Yacht Club and University of Florida booster Club.  He is a member of First Presbyterian Church, Crestview Florida.

Hugh married Faye May, from Baker Florida in 2020.

He is preceded in passing by wife Mardi and Cheri, two sons, David and Douglas.

We will miss Hugh so very much as he was a very sweet kind man. He was one of our gym buddies for several years. He always went out of his way to do whatever he could for any one that knew him. Always greeting everyone with a very sweet smile. We were very happy to have met Hugh and sad to hear of his passing. May he now be pain free and rest in peace. Lov you Hugh.

Hugh…. What can I say….. you came to me as a smiling happy 80 year old wanting Personal Training. What a PLEASURE it has been being your Trainer! You SHOWED me strength like NEVER before, LOVE like NEVER before and a sense of humor that I’m stealing from you… gladly! You are THE BEST! Thank you for sharing your AMAZING family with me and with our Riviera gym family! Keep resting…. Until we meet again. I love you TONS.