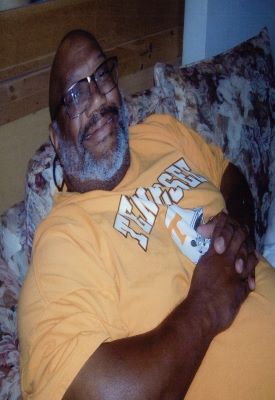 James Henderson Goins Jr. 57 joined our Heavenly Father on Oct.16th, 2021 after a valiant battle with multi organ cancer. He passed peacefully surrounded by loved ones at his home in Crestview, FL. That he shared with his life partner and wife Regina Goins.

James was born in Morristown, TN. On October 26, 1963, to James and Olivia Goins. He attended Morristown Hamblen High School East and studied at Walters State Community College. During high school his musical talents blossomed as he was fond of playing the drums, guitar and singing which carried on with him the rest of his life. He joined the USAF in May of 1983, among the places he served was Sicily, Italy and lastly, landing at Eglin Air Force Base, Florida. This is where he eventually married Regina and thereby gained two stepsons Michael and Thomas Disney along with one stepdaughter Christine Disney. This family grew to nine grandchildren and six great-grandchildren plus lots of animals to date.

He was a beloved family member of four families, the first being his birth family. He is survived by his mother Olivia Goins, his three sisters Lorrie Goins, Kimberly Salazar, Rhonda McCoy and his one brother Billy Douglas Goins. Along with six nieces and two nephews to date. He was best known to all of them as “Bumbie.” It was with this family that he was a member of Bethel Missionary Baptist Church in Tennessee and a Christian throughout his whole life.

His second family were the men and women he proudly served our country within the United States Air Force. He met lifelong friends and enjoyed the “jam sessions” they had along with fun memories that everyone will carry-on and share for years, as this family merged into his third family in 1986 when he met Regina and her three children. He and Regina married on October 1, 1993, and just shared their 28th wedding anniversary.

James joined his final career family, Waste Management, gained his CDL license and was a truck driver there for 25 years. He always referred to them as his brothers and enjoyed getting together at Christmas parties, house parties, playing the weekly group lottery drawings & especially heading up the “Green Ballers” Fantasy football league! As he was a diehard Dallas Cowboys and

This is what James Goins Jr. was best known for, being a huge hearted and loving family member to ALL! He always found time for everyone that he loved, in their celebrations and times of need, and in all the children’s sporting events and fun activities.

He will be missed by ALL, but the two most important women in his life will surely miss him the most, his mother Olivia Goins and his wife Regina Goins. They request in Lieu of flowers to donate to the cancer center of America in Newnan, GA.

Regina Goins cannot express enough gratitude for the outpouring of love and assistance that everybody has shown, as this disease came on so quickly and has changed the course of her life now.

The family will carry out his final wish later in a private ceremony to spread his ashes in the Gulf of Mexico.

I loved this sweet guy❤️ I work at the dump in Baker where he came to dump his truck. I truly miss him and I am praying for his family😞

Sending our heartfelt condolences from the Lakin/Smith/White family

James’ smile always lit up a room and his laugh was contagious. I will always treasure memories of family fued game night with James as our comedic host. James you will be missed. 💙💙

My condolences to my Goins family. May God give you peace ❤️