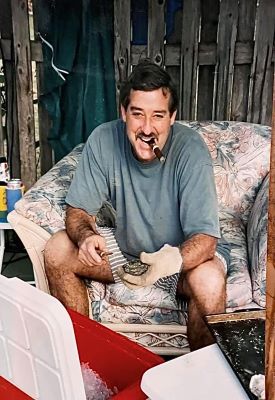 On September 25th, 2021, James “Jim” Meager of Crestview, Florida, passed away peacefully at home surrounded by loved ones.

Jim was born to Charles William and Ruth Jane Meager in Wadsworth, Ohio on December 18th, 1947. He was the middle of 3 children. He graduated from Akron University in 1973 with a bachelor’s degree in Business Administration. Before graduating, he was already employed with Goodyear Tire & Rubber Company as a re-treader. Upon graduation, he was promoted to Regional Sales Representative. While in this position, Jim traveled to many areas and saw the need for a new tire store in Crestview, FL. He then moved to the area and acted on that need.  In September of 1978 Jim began Crestview Tire & Wheel. He, along with his dedicated employees, built it into one of the most successful automotive businesses in the area and it is still thriving today. Jim worked hard and played hard. Jim had a passion for the outdoors. Boating on Blackwater River was his favorite thing to do with his children and grandchildren. He also enjoyed yard work and home projects. Jim also had an unwavering love for his dogs.  In his younger years, Jim was a member of the Foxwood Country Club where he enjoyed golfing and made lifetime friends. Jim truly lived his life to the fullest.

Jim is preceded in death by his parents, Bill and Jane Meager.

In lieu of flowers, the family is asking for donations to be made directly to Panhandle Animal Welfare Society, also known as PAWS. Address is: 752 Lovejoy Road NW, Fort Walton Beach, FL 32548.

A Celebration of Life

Had the pleasure of meeting Mr. Jim about 25 years ago. He was VERY trustworthy and honest , also funny. I will never forget the service that is still offered at Crestview Tire & Wheel. My condolence to his family & staff. R.I.P. MR. JIM.

We met Jim years ago when he bought the house next door. Truly one of the nicest people on the planet. He was a great neighbor and friend. Our thoughts and prayers are with the family. He will be missed by all who had the pleasure of knowing him.

I met Jim years ago in 1994, due to a tire issue with our horse trailer. Crestview Tire & Wheel has been servicing our vehicles, ever since.

We are so sorry to hear of Jim’s passing, & condolences to his family & friends.

He was always very kind, honest, & fair to us; & we noticed that he was the same to others, who brought their vehicles in.

Jim will be missed.