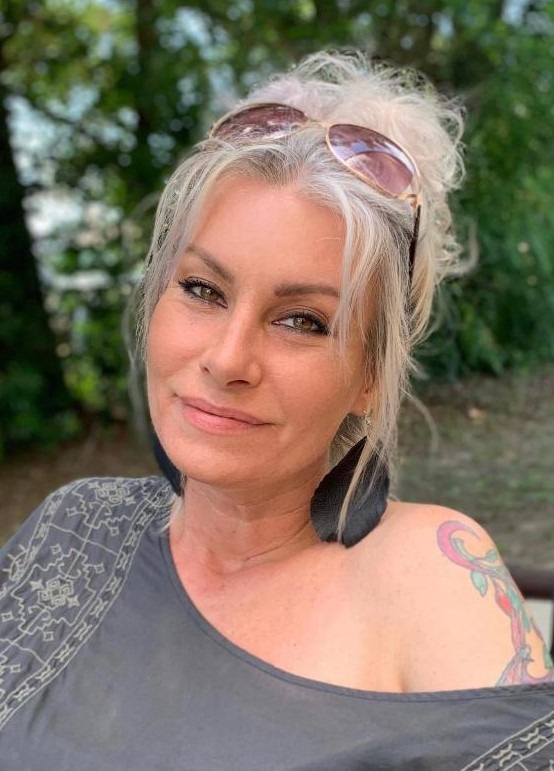 Jody Lynn Kuikka, 46 of Crestview, passed away Saturday, September 4, 2021, after a brief but courageous journey with Stage 4, breast and bone cancer.

Jody was born on January 4, 1975, to Alicia Johnson and Earl Walter Johnson Jr. in Sault Ste. Marie Michigan. Jody lived most of her childhood in Duluth MN and a small time in Safford Az. Jody was represented by Elite Model Management in her late high school years and early 20’s. She graduated Esko High School in 1993. She attended Cosmetology school at WITC in Superior Wisc. Jody worked at Spirit Mountain, Island Beach Resort, and Lutsen Resorts.

Jody married Todd Mark Kuikka and had two beautiful children. Brenden Earl Kuikka, and Sydni Taylor Kuikka. Jody raised her children in her favorite place in the world Aviano, Italy where she made friends that became lifelong family. The family moved to Guam where Jody worked closely with animals. In Guam made more lifelong friends and continued to raise her family. In July 2008 she moved to Crestview, Florida. Jody worked at the Wild Olive, Hub City Ford and was extremely proud to work at Okaloosa Regional Detention Center. Jody’s beauty could stop traffic. Her passion was working with Sephora, Tarte, Peter Thomas Roth to make people feel beautiful. Jody also ran a full-time cleaning business Kuikka Cleaning Services with her daughter Sydni Kuikka.

Jody’s laughter could fill a room. She was passionate about life and valued friendships deeply. Jody’s unconditional love and unwavering support of her children gave her the strength to keep going every day.  Jody spent the last decade with the love of her life Avery Hill. She always said he was the gift god gave her. Jody had unbelievable spirit during her last nine months she endured the pain of the breast and bone cancers, while having extremely invasive procedures and never once complained. At times when we were speechless, she carried us though this journey with her.

Jody is survived by Her fiancé Charlie Avery Hill of Crestview Florida.

Aunt and Uncle: Les and Nancy Nelson Colorado Springs Co, Cousin Ryan Nelson and son Aidan Mathew Nelson and many other cousins, aunts and uncles in Illinois that love and will miss her.

Jody held a special place in her heart for Taylor Patterson. Jody spent her days even through treatment with the children so special to her she called them JoJo’s babies, Baylee Patterson, Noah Patterson and Hayden Patterson.

Express your condolences with flowers sent to Jody Lynn Kuikka

Jody was a huge inspiration and fun loving individual. I was happy to have shared so much time with her and gain two amazing children with her. She stood by me through many combat deployments, overseas assignments, and Jody held the fort down in my absence. Although our journey parted ways, we worked as a team to raise to wonderful adult children. Sydni and Brenden–may your passion and love shine bright and honor your mother through all of the positive influences she offered you. You will carry those forever. Jody, I will miss you and that wonderful laugh.

I met Jody in one of the Tom Thumb stores in Crestview. We were getting drinks and she was also. I looked over at her and I was starring at her like a deer in headlights. Her beauty was unbelievable!!! I told her : I was sorry for starring but your so beautiful!!! She smiled and said thank you.
I wanted to talk more to her: so I got up the nerve and asked her if she was a model. She said no I work for Tart. I did not know what Tart was; so I googled it and it was a makeup line. I called Ultra and they did not know her. Then I called Sephora and I told them I was looking for a beautiful lady with platinum blonde with beautiful brown eyes. Who answered the phone put Jody on!!!!! I told Jody how I found her and she was shocked and amazed that I did this. Made apt. for Jody to do my makeup. Then our friendship began and never stopped. When I lost my sister in April, Jody called me and consoled me when she had the cancer. We knew we were soulmates; we were made out of the same mold. I love you Jody Lynn, its an honor to know you my sweet friend!!!!! Fly high darling!

I met Jody from Sydni, Sydni was one of my best friends in high school and she was always the person I always wanted to be around because of how funny and full of life she was. Her mom was the same way, hanging out with them together was always a good time. I love that family a lot and I know Jody is at peace now and that Sydni is gonna do amazing things in life. I pray for her family and think about them everyday. I will never forget Jody and I will always love and miss her.

Deepest Sympathy to the family of Jody, and fiancé Avery Hill and family. You will be greatly missed by all.

So sorry, she was a good soul, and was always willing to help anyone who needed it. Very positive and STRONG!! She will be missed! Love and prayers from James and Melody Collette

My deepest condolences to Jody’s family. I did not have the pleasure to know Jody long, but she made a huge impact in my life while I did. Jody was truly God’s earth angel, she shared a smile, a laugh and a kind word whenever you talked to her. She will truly be missed. Fly high Jody….until we meet again my pink sister.

I met Jody when our boys were in the same kindergarten class. Brenden and Dylan became friends and Jody had invited Dylan over for a playdate. Our friendship blossomed from there. I babysat her kids for Spring Break and then began watching them daily as Jody began working at DJJ. We both went thru our divorces together. Even with everything she was going through at that time, she was an amazing support system for me during my divorce. We had so much fun together. Going to the creek, tanning, just hangin out on her front porch. There were many laughs, many tears but always love. I will miss you, Jo! Your smile, your laugh, your love and light and gypsy spirit. You were one in a million. I feel so blessed to have called you my friend.
Rest in paradise! ❤

What can I say, she was a cute little girl that grew up next door to me, my daughter babysat her , they were like family. I still can remember this cute little gal carrying a worm in her hand over to her mother and I and shivered all the way! It was a classic! That beautiful young lady will have a mansion in the sky.

Jodie was an amazing soul and friend! She was honest and caring. She was one in a million and I am proud that I got to know her in this lifetime. She was always there when you needed someone to talk to. We both worked together for makeup and skincare brands. I will miss her tremendously! She was a true inspiration! Love ya Jodie! ❤😘