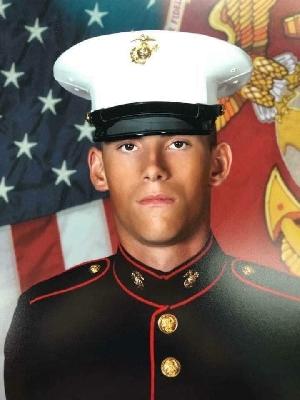 Our family suffered the tragic and unexpected loss of our precious Joshua â€œJoshâ€ Michael Bragd on Saturday, April 4, 2020. Josh was born on June 9, 1998 in Fort Walton Beach, Florida. In his short twenty-one years, Josh accomplished so much and had a profound impact on so many lives. In 2017, Josh made his family proud when he graduated from Crestview High School. While in high school, Josh was a proud member of the JROTC program where he aspired to one day serve this country by joining the armed forces. After graduating from high school, Josh courageously committed to serving as a United States Marine. At the time of his passing, Josh was stationed at Camp Lejeune, North Carolina. In his free time, Josh enjoyed playing video games, watching movies, and spending time with friends and family. Josh is preceded in death by his father, Michael John Bragd, and his grandmother, Barbara Jo Bragd. Josh is survived by his doting mother, Jena Johnson; his stepfather, Walt Johnson; his sister, Kennedy Lee Bragd; his brothers, John Dillon Bragd and Pierce Saige Johnson; his girlfriend, Jenni Williams; his grandmothers, Glenda Crider and Patxee Johnson; his grandfather, Fred Cassell; nieces, nephews, and several aunts, uncles, and cousins. Semper Fidelis, the motto of the United States Marine Corp, means â€˜Always Faithfulâ€™. Josh embodied this not only as a United States Marine, but also as a faithful family member and friend. While Joshâ€™s time on this Earth was short, the impact that he had in the hearts of so many will last always. You are loved Josh, and you will forever be missed.

I love this!!! I will love you and truly miss you so much josh. And I hope you are in heaven hug our dad and grandmaâ¤ï¸â¤ï¸â¤ï¸

Forever in our hearts!!

May the angels soar and the gates of heaven open up and accept you as you accepted us into your life. We thank god that he blessed us with the time we got to spend with you and will never forget the joy and humor you brought to us. We will miss you!!!

Elizabeth Chapman (Friend of the family)

My heart aches like I’ve never know.. From the time you were born to the last day on this earth, we always connected. You were my little side kick as just a baby. The long talks we had through your time growing up (about EVERYTHING!) till the very last day you had on this earth as a young man. I will cherish these talks. You could always talk for days and put a smile on my face. So many things that I’m proud of you for like becoming a Marine, being responsible, and doing the right things. Those are all wonderful things but.. I’m most proud of you for, being strong and developing a personal faith and relationship with our God and accepting Jesus as your savior. Jesus gave us one command and that was to love. Josh, you fulfilled his command! Through your kindness to others, being a good son to your mother, good brother, friend, and so on. I’m beyond proud of you and just wish I could say this directly to you right now..

I have no doubt that we will see each other again and have a long conversation, I know. Until then, I will always love you and will never forget you..
Love, Uncle Mark

Fair winds and following seas brother. Semper Fi you impacted all your brothers lives here in Lima co 3/8. Forever an always we will carry you in our hearts. You’re family will be took care as if they’re our own. Speaking for all of us not goodbye see you later.

If thereâ€™s one thing I know, I know how loved you are , Josh. Your Mamaâ€™s eyes sparkled when she spoke of her boys. She was always so extremely proud of you. You will be deeply missed! …Go rest high on that mountain. â¤ï¸

Rest easy Josh. You made such a big impact on every person you met. I’ll never forget that you made it your priority to make everyone laugh at least once each day. Prayers for the family. â¤ï¸

I love and miss you man, miss our talks and listening to you tell me about all your training. I believe that you accomplished that which we talked about, impacting other people to instill into them to want to be better and that is worth more than gold. Till I see you again, know you are a special part of my life…

Our condolence go out to this beautiful family! Iâ€™m so sorry for your loss. We send love and prayers to you and your family from Maryland.

Josh. This is crazy that this happened. It seems like just yesterday we were in the field together with 2/8. You were a great kid and you had your head on right. You looked out for other people and always wanted to help out. You would always come up and ask questions so that you could go help out the other junior Marines. You strived for success always. Til Valhalla Brother. Semper Fidelis. 2/8 Echo 2nd platoon.

Rarely if ever does life make sense. Why you were taken so young is beyond me. Your passing has made me question my own mortality as well as the reality of life. I wish I could actually tell you something. You and I shared our formative years and to see you go so quick is more than a tragedy. Never before has someone’s passing had such an effect on me. I love you, Josh. I’m sorry we could never sit and have a beer or be anything other than stupid kids with each other. I’ll miss you.