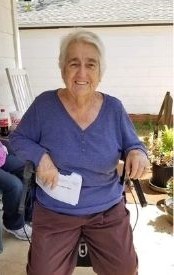 June Beryl Busbee, 86 of Crestview, passed away Sunday, August 15, 2021, at home with her family at her side. Mrs. Busbee was born in Norwich Norfolk England on June 13, 1935, then moved here in 1952 to be a lifelong resident of Okaloosa County. June was a retired seamstress at Alatex and was a member of The Crestview Mennonite Church.

June is preceded in death by her husband Elton Ivan Busbee, son, Robert Ivan Busbee, and her parents, Robert A Sparks and Eliza LeMay.

Sue , Tammy , Jennifer & Darlene … I am saddened at the loss of this precious lady .. Mrs. Busbee will always be remembered as one of the sweetest ladies I’ve ever known . My girls loved her dearly and will never forget her . You all will be in our thoughts and our prayers in these coming days , weeks & months . May God Bless you all . Darlene Simpler Soules

Mrs busbee was my baby sitting when i was a kid i remember her cutting up cucumbers and running on the porch to get more as she cut them. Also eating raw oysters with Robert on a 5 gallon bucket in her driveway! What was i thinking lol. After many years of not seeing her because i moved to Missouri when my dad died in 2011 she came to send her condolences at his funeral! Sending my condolences as i am still in Missouri and can’t make it to the funeral services.

She was the absolute best Nanny a girl could ask for!! With so much love from one of her First Street grandbabies ! 🤟🏼

I love you Nanny. Thank you for always loving my family and I as if we were blood related. Thank you for always remembering our birthdays. Your cards always brought happy tears to my eyes. How much love you gave to us was beautiful. Thank you for always loving my mom like your daughter 💗 Thank you for helping take care of me when I was little. I have so may wonderful memories at your house. You were a grandma to me and a friend. I will miss you. I hope you and my granny Cora are up in heaven dancing together ❤ I love you always and I’ll always remember you and tell stories to my kids about the wonderful ladies I have had to look up to! I pray for all that are mourning your loss, that they find some comfort in knowing your in heaven and that you live on in my heart. Love Kelly

I know you miss your mom, she won’t be hurting anymore. Enjoying all the angels in heaven. Love to your family,
Wanda

I will always remember June as a lady who loved everyone. It was a pleasure to worked along side her at Alatex.
Our girls loved Ms. June. I know she will
Be missed. Go rest now June.

So sorry to hear of MS. June’s passing. She was such a sweet lady!

I am so very sorry for your loss. I remember her being so kind to all of us for many years.

Faye
Ms June was a wonderful person, she always saw the best in everyone. She will be greatley missed. God bless the family.

Ms June you were a very sweet lady and I enjoyed our conversations when you would come in to get your meds. You will dearly be missed, RIP Sweet Angel!

Nanny you will be missed by many. I feel as though I’ve known you my entire life. I’ll miss the call on our birthday we share. Your work here is done. Give Robert a hug for me. We love you.

Miss you so much always love you my sweetie auntie . Been fun all the time. never forgotten you and uncle
(joy heavenly together again j

We knew you our whole life… sure gonna miss you sweet lady… Rest in peace June….

Dear friend, you will be missed. I’ll see you again in paradise one day.