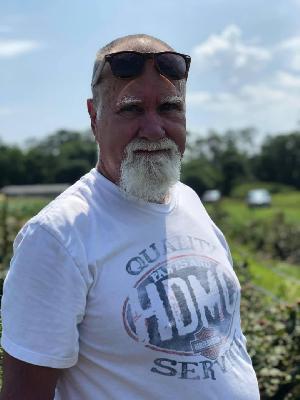 Ken Brown, 68 of Crestview passed away Thursday, October 22, 2020. Ken was born June 26, 1952 in Noblesville, IN, he was raised and attended school in Sarasota, he moved to the area 25 years ago. He worked as a refrigeration technician, he coached softball and travel ball for the City League. He was a member of Convergence Church. He was a proud member of the CMA and enjoyed riding his Harley, he loved racing, playing his guitar and old autos, including his 1955 ford. He enjoyed people laughter with his sense of humor and jokes.
Ken is preceded in death by his father, Robert Janes and brother Gary A Brown. He is survived by his loving wife of 45 years Debbie Brown, his mother Evelyn Janes children, Kenneth Spencer Brown, Jeanne Lynn Burns, Frank â€Martyâ€ VanSchmidt, Jeffrey Brown, Christina Bexley, Joy Jones, Brendan Powell, Laâ€™Al Woodard, brother, Rick Brown, sisters Robin Haley, Melody Janes and 15 grandchildren.
A celebration of Life will be held at a later date.
You may leave your condolences at www.brackneyfuneralservice.com

My dear brother, I will miss you so much. Thank you for loving me and making me laugh from day one. In my heart, there will always be a special section full of love just for you and that will never change. Until we meet again……

We’ll miss you ! Until we meet again ðŸ™

Ken you were a great brother in law always caring ! I never thought this would happen to you , you had so much life in you! God knows who is his angels and he needed you , but her on earth we will all miss you wit and you joking ! You were a great father and all around person may you now have peace! We will all see you again in our end! Your brother loved you so much and my family all loved you! I want to remember you as your want to be comedian!

Rest In Peace Kenny, we have had some great days together on the cruise, you will be missed by us!

Dear Brother-in-law you were a nut but a awesome person and father and uncle ! You will surely be missed by all Iâ€™m so sad you are gone you had so much life in you! I will never forget the help you gave your big brother when he had his surgery ! Till we all meet in heaven I know you are peace and God got another angel! God bless to all who knew him he was a character!

Dear Brother-in-law you were a nut but a awesome person and father and uncle ! You will surely be missed by all Iâ€™m so sad you are gone you had so much life in you! I will never forget the help you gave your big brother when he had his surgery ! Till we all meet in heaven I know you are at peace and God got another angel! God bless !

I knew of Ken for quite a while. When he was with a food service co. and I was with a grocery co.we’d cross paths from time to time. Then one day he’s employed with the same co.i was and same Dept. We talked often,worked together joke around and have a good time. We’d laugh about the “Three Stooges “. He was proud of his God,church and family. Yes, he really liked his Ole Ford and his bike.He was a good guy and I know he will truly be missed.Rest in peace. Sincere condolences to Debbie, family and friends.

Love you big brother and I can’t believe your gone. Thank you for all the memories and making me laugh all my life. Thank you for always looking out for your little sisters. Thank you for taking me to Disney World for the first time. Thank you for making me dumplings in laughlin. I never forget how you met me my first night in Vegas and the grand canyon trip and all of our places that we adventured later on. No matter what , you are the one I liked like the most and the orjoker of the family. ThAnk you most for loving me. When i was a pain in the was. I love you Kenny, my big brother and i can’t give that you are gone. I will remember you for the rest of my life . HAVE FUN WITH DADY. GRANDMA, GARY DADDY AND VICTOR. IM SO SORRY WE NEVER GOT THAT RACE IN. BECUASE I KNOW I WOULD OF WON. As long as I live, your memory will. I know we argued , but that’s ok , because I know we loved each other. You protected me all my life a d now I got one more angel looking out for me. I love you always big brother. Your little sister. I nevet forget how you made me get up for that sunrise st grand canyon a d now I’m so very glad I did. I hope heaven looks just like that sunrise we saw at the grand canyon that day and i will treasure those memories , I already have , now even more so for the rest of my life. I love u big brother . hug daddy and Gary extra tight for me. I remember you driving that old Chevy bel Air. You fixed wipers by tying on strings. Never a dull moment when you were here. Now I have no one to break the wishbone with . I always adore you, my big brother. Thank you, for protecting and loving me since the day I was born. It has not sunk in yet you are gone. I just can’t wrap it around my brain. Thanks for giving me a extra sister too most of all, because Debbie is truly a gift to our family. Your littlest sister , Melody Janes, you be happy to know that my legal name as of today . I always love you big brother , your sixteen years older, you been here since the day I was born and I just can’t imagine my life without you here. But you always be in my heart. So glad I have another angel now, I bet your rocking the heavens. Rock on, Big brother rock on. You be heaven’s superstar. Thank you for your 7 kids and mostly just for being my brother. Melody Janes