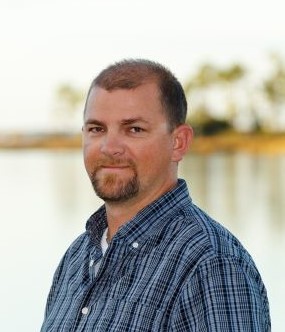 Kenneth Carroll Lee Jones passed away unexpectedly at the age of 46 on June 29, 2021. Ken was born June 22, 1975, in Ava, Missouri and was a long-time resident of the Florida Panhandle. Though he was only on earth a short time, he is remembered every day by his friends and family. He grew up pipelining with his dad and could operate any piece of equipment yet having no mechanical knowledge whatsoever. Ken lived in Panama City, where he had worked for The City of Lynn Haven for 10 years.
Ken met the love of his life, Alison on Plenty of Fish.com. They lived in Panama City from 2016-2018 then was forced to move due to losing their home from Hurricane Michael. He had just passed his test for his Class B before the hurricane and obtained his license after the storm. Excited for his new career, Ken started working for Clay Blizzard at CBT Trucking driving a dump truck then changed to working for construction materials. In Feb 2021 he switched to driving for McCullough Trucking so he could be closer to home, with long 12–14-hour days McCullough yard was a half a mile from the house, so he loved the short commute.
The simplest pleasures in life brought great joy to Ken. Most of his life he rode his motorcycle always getting out on the open road he would just ride for hours. He had an uncanny ability to make everyone laugh always being the life of the party beating everyone at cornhole and yet had your back if you were to call him day or night. If Ken did not give you crap, he did not like you! He was a diehard Florida Gator and Kansas City Chiefs fan along with Nascar. His passion for Nascar was so large that Alison was going to surprise him with a Racing Experience in October. If you wanted Ken on a Sunday during race season you could find him cheering on Kevin Harvick drinking a cold one or few!
Pride was never an issue for Ken, he would and has worked three jobs just to support his family. Family meant everything to him, even during difficult times the unconditional love he had for his children was all that he lived for.
One of Ken Jones favorite sayings was “This would have killed an ordinary man” ~ Alison would always respond “Good thing you are extraordinary”!
Kenneth is preceded in death by his father, Michael Lee Jones, Kenneth is survived by his mother, Anna Lucile Satterfield Jones, his wife, Alison Leigh Jones, his sons, Andrew Jones, Dalton Jones, Gavin Jones, Seth Jones and Nolan Jones, his daughters, Hanna Adams Jones, Kiya Ward and Kali Jones, his brother, Robert Jones, his sisters, Sondra McCord, Christie Vauter and three grandchildren.
We will be having a gathering of family and friends to celebrate Ken Jones Life
Saturday, July 17th in Panama City
Sunday, July 25th in Crestview
“This is Gator getting off here and going home over and out.”