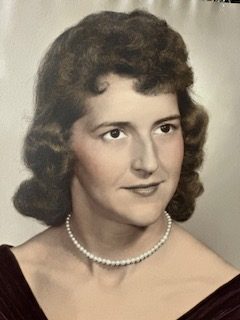 Lola Vae Roper Becker was born on May 12th, 1936, to Ealum and Eva Roper between brothers Alton and Gerald in Butler, Alabama.  She passed through the Pearly Gates of Heaven to her Lord and Savior Jesus Christ on the morning of December 14th.

She and her family moved to Crestview, Florida in 1951.  She graduated from Crestview High School in 1954, and continued to organize monthly luncheons for her classmates until her health no longer allowed.

After graduation, she worked at the Fox Theater, where her mother managed the concession stand.  She went to work for Gerlach Motors until 1956, when she went to work for Vitro Services.  It was there, she met the love of her life, Louis, and it changed she and Dusty’s life forever! He was from Santa Rosa Beach, but he was definitely moving to Crestview for his “Sweetie”!  Louis adopted her daughter, Dusty, and then in 1963 they had their son, Randy.  They built a life to be admired, 62 years together as partners in everything.

Her employment with Vitro Services at EAFB allowed her to hold several positions, moving up to Supervisor of Publications.  She was a force with whom to be reckoned, regardless of what she was involved in, whether it was raising hogs and chickens, creating the cookbooks and organizing the Christmas Parties for Vitro or family gatherings.  She was the boss, which everyone knew and accepted, because they knew she was the person for the job!!!

She and Louis are members of the First Presbyterian Church of Crestview.  She was very involved with the Woman’s Circle and with every event at the church, always cooking one of her famous recipes for each event.  They hosted Easter Egg Hunts each year at their home.  Her baked beans were a must at each cookout!

After 41 years, they both retired together in 1997.  Afterwards, they continued a life of adventure, camping all over the country.  They owned several travel trailers, which she lovingly equipped with everything they needed along the way.  They enjoyed taking their grandsons to the mountains every summer, and they made lifelong friends wherever they camped.  They were often Camp Hosts at the state parks where they stayed.

In lieu of flowers, we ask that you make a donation to The First Presbyterian Church of Crestview in Lola’s name or the charity of your choice in her honor.

There will be a time of visitation Saturday, December 17th at 9:30 am at First Presbyterian Church of Crestview.  Her service will begin at 10:30 am led by Pastor Mark Broadhead at the church.  Interment will take place at Gulf Cemetery on County Highway 393 in Santa Rosa Beach.

We love you Mama and you will be dearly missed in so many ways.

Express your condolences with flowers sent to Lola Vae Becker

This page isn’t large enough for me to write everything I loved about Lola. She was larger than life in everything she did. She was a great mentor and friend, cook, counselor (shall I go on…). Most of all, she was down to earth and real; there weren’t any made up airs about her. What you see is what you get, and I loved that about her.

I pray that God comforts your hearts with His peace that passes all understanding. Only He can fill the void at a time like this. You and all of the family are in my prayers.

Such sad news. She & her family were the best neighbors anyone could ask for. We also used to attend the same church. I was honored to call her friend. Such an awesome, sweet lady. She will be missed. Prayers of comfort for her family.

I was saddened to hear of your loss. You’re in my thoughts, my heart, and my prayers.

Wishing you peace, comfort and courage, at this time of sorrow. My heart goes out to you at this difficult time. I will keep everyone in my thoughts and prayers and remember Love lives on forever.
Jack and James Powell
Debbie and William Childree

My deepest sympathy to Lola’s family, you’ve lost a beloved family member, but Heaven has gained an Angel. She and Louis were among the first to welcome me to First Presbyterian more than 30 years ago; I don’t remember her without a smile. RIP, Lola

My deepest sympathy to the Becker family,as I worked at Vitro for over 20 years and came in contact with Lola and Louis on a daily basis. We had fun together, especially with Lola arranging the Vitro luncheons. I will miss you Lola. We will all set at the banquet table some bright day.

Louis and family,
Remember the best times, the laughter, the song, the good life she lived while she was strong.
We will always remember her smile and strength.

God bless Lola and the Becker family through this time of grief at her passing. We offer our condolences and pray for peace and comfort as you rejoice in her memory. Love to all.