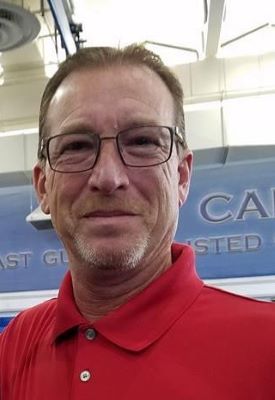 Michael Brent Vigren, 56 of Crestview, passed away Thursday, September 2, 2021, unexpectedly at home with his family at his side. Michael was born September 11, 1964, in South Bend, Indiana and was raised in Elkhart, Indiana. He graduated from Concord High School in 1983 and moved to the Florida Panhandle 16 years ago from Murray, Kentucky. Michael had worked for Lowes for 26 years and for 16 years was the ASM for The Crestview Lowes. He was an avid sports fan (especially Notre Dame Football), boater, fisher and loved spending time on Crab Island.

A Celebration of Family & Friends on Tuesday, September 7, 2021, beginning at 5:00 pm, from the Chapel of Brackney Funeral Service. Flowers or contributions go to the American Heart Association.

A Celebration of Family & Friends

Express your condolences with flowers sent to Michael Brent Vigren

My deepest sympathy to you Cheryl, your immediate family and friends of Michael. I pray that you will find strength and comfort of the memories created during this time.
Ms.Kelly

Condolences to the Vigren family. The time I worked with Mike was great and he was a great man. He will be missed.

I was so sad to hear about Mike’s passing. I worked with him at Lowe’s for over Six years. He always was such a nice man and a good boss. Sending Prayers, God Bless.

My thoughts and prayers go out to you Cheryl and Matthew and Tanner!
Mike will be missed dearly. He was a fantastic Father, Husband and friend!
God Bless!

Was shocked to learn of Michael’s passing. Earlier this week he was mowing his lawn. I will miss seeing him puttering with his boat and getting it ready to head to Crab Island for the day. Your neighbors here at Pinnacle will truly miss you.
My deepest condolences to you Cheryl and your sons.
Smooth gulf waters for your trip to the heavenly waters above.
G. Harper

They say time can heal all wounds. And this I know is true. So time is what it is going to take. For every one of you.

And when enough time has gone by. In weeks, months, or years. Fond memories of the times we’ve all shared. Will then replace your tears.

But as for now, a brand new star. Lights up the Heaven blue. Brightening up the darkest nights. To help you make it through.

He lived his life. With grace and cheer. An amazing man. To many so dear.

He placed his family. At the top of his list. His presence and voice. We’ll surely miss.

He was the type of man. That his big smile would greet. To those around him. Generous and sweet.

With his time on this Earth. He was selfless and kind. The memory of him. Shall grow in each mind.

We loved him so. And forever we will. Thoughts of him. Our days we shall fill.

With tears of sadness. Together we cry. With heavy hearts. We share this Goodbye.

I am so sorry for your loss, this is heartbreaking I’m gonna miss Mike so much he was one of the good ones Lowes will definitely not be the same praying for his family and all of his friends ❤️

I am so very sorry for your loss Mrs.Vigren.
Your family is in my prayers.

Mike was a true Professional and encouraged everyone to do their best everyday while enjoying what they do. You will be missed Sir. Until we meet again.

Lowes will not be the same without you Mike,thank you for been such a great manager.Love.

One of the 4 old timers at our store before I left. Saw him on my last day. He said good luck, and we’ll miss you here. Shook my hand. Also, a close neighbor of ours. One of the good ole guard @ Lowe’s. God speed.

Mike was the manager who interviewed me at Lowe’s. He was one of the best, fairest managers I’ve ever worked with. I have many fond memories of my time at Crestview Lowe’s with him. Though I haven’t seen him in a while I still mourn his passing and offer my deepest condolences for his family.

Truly one of the best men I’ve ever had the privilege of knowing. He loved his wife, family, and his friends. Lowe’s afforded him his life away from the store, and he lived it to the fullest. He will truly be missed by all who had the honor to know him. My love and prayers go out to Cheryl, Tanner, and Matthew, and all who loved him. Our lives have been blessed and will not be the same. Until we meet again, Uncle Daddy, rest easy.

I will always miss Mr. Mike. He was genuinely true as a person, a friend…a boss. He stood up and defended his employees right from wrong, especially from rude customers. God Bless his family and friends with my deepest sympathy.

Mike was one of my best friends at Concord. Helluva stand-up guy. He’d do anything to help you if you needed it.

Coincidentally I worked with Pat for a few years later in life.

Sympathies and condolences to all. The world is less one more good one today.

Mike was a student in my Spanish I and II classes at Concord High School. I remember him for his positivity and enthusiasm. My deepest sympathies.

He will be watching the Irish in heaven on Sunday, RIP Mike, Class of 83

Mike is just one of a kind! Such a reliable, responsible, fun, loving man! He was the Proudest of his Two sons and his marriage to Cheryl! He Definitely was a Spitfire and would take care of business, if necessary. I Called He and Emily “Our Fearless leaders” …. lead on Vigren you will Never be forgotten! See ya soon ❤

My deepest sympathies and condolences to Cheryl, Tanner, Matthew and Mike’s mom, Pat.

I graduated from Concord with Mike in 1983 and remember many fun times with Mike very fondly.

I’m sorry to hear about his passing, far too soon for sure. I have no doubt Mike was a great dad, husband, friend and co-worker to so many during his time with us. Rest easy Mike.

Anyone who knew Mike will miss him. He I terrified me at Lowe’s over 4 years ago. For those of us who have been employed with different companies throughout our lives are very quick to spot the real Deal. Mike was that. The best manager this store has had in my short history with Lowe’s. He always said hello, he saw you and by doing so you felt you belonged and it was good to come to work. Cheryl and the boys, no one will replace him. Men that big are one of a kind. My prayers are with you.

I was shocked and so saddened in learning about Michael’s death on FB. I knew Mike in his younger years. He was always a good kid. I had been keeping track of him via FB and was so happy to see he was enjoying life so. He would always love to come to my parents house with his dad and fish on the river. My deepest condolences to his family.
Janette Day

I was so sadden by the news of Mike’s passing. The time I worked with him at Lowes was great. He was a great man and I learned alot from him. He will surely be missed. Prayers sent to his family and friends. Til we meet again my friend.