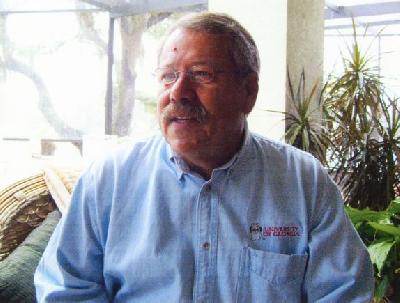 Michael 'Wayne” Jones passed in peace on Friday, July 9th, 2021, at Ascension Sacred Heart Hospital. The 44th Anniversary of Wayne and Sandy’s marriage.
Wayne was born July 25, 1951, in Griffin GA, a son of the late Spencer Donovan Jones and Margaret Price Jones.
Beloved husband for ever to Sandra “Sandy” Lorraine McElfresh, Herminie PA Wayne was a devoted and caring father to Heide Jones Hildreth, Mt. Pleasant SC and Tyler Jones, Bonneau Beach SC. He so adored his grandchildren, Tristan and Stella Hildreth and Lily Jones.
Wayne was the epitome of the American Entrepreneur. His life's work and passion was telecommunications infrastructure. Co-Founder of Cable Consultants, Atlanta Georgia. Managing Owner of South East Communications, Summerville, SC and N2N Optics LLC, Laurel Hill FL.
Wayne was an avid and lifelong fan of the University of Georgia, Georgia Bulldogs. His man cave was even of Georgia Bulldog colors and festooned with everything imaginable Georgia Bulldogs. He was looking forward to the upcoming season opener against Clemson GO DAWGS!
Wayne and his “forever wife' Sandy relocated to Florida where he continued to run telecommunication businesses.
His business may have kept him on the road for extended periods of time, but he lived for Sandy, his children, and his grandchildren. He loved them all unconditionally.
Wayne truly enjoyed deep sea fishing, golf, choir practice with the “Good Ole Boys” and, of course, collecting.
Wayne's mind was always going. He truly was intellectually ahead of his time, and a forward thinker. He was constantly thinking of new and innovative ways of doing things, building things, collecting things, and dreaming of things. He was a true, mathematical genius. His math skills were borderline genius if not genius. He could outperform most people with calculators. He would always be asking friends and family to give him “hard” numbers to add, subtract, multiply or divide. He would even query his grandchildren.
Wayne was a good and kind man. He would give you the shirt off his back if he thought you needed it, He never met a stranger and those he befriended became loyal friends for life. There is no doubt his greeting to St. Pete will be “Hey there'*
He will continue to stay with us all through memories, and the laughs he forced us all to endure. If you knew him well or barely at all, he always left you thinking or laughing. Wayne, you will be deeply missed but always in our heart.
Friends and family will be received at Brackney Funeral Services, 480 E. James Lee Blvd, Crestview FL, will be held on Sunday, July 18th, 2021 , at 2:00 PM with a celebration of Wayne's life memorial at 3:00 PM

Our condolences on the passing of Wayne. Please accept our deepest and sincerest sympathy and Wayne may Rest in Peace. We love you Ms Sandy…..Mary and Joe.

We are so sorry for your loss..Wayne was a wonderful man and we will miss him . We will be praying for you and your family .
Rest in Paradise dear friend ❣️