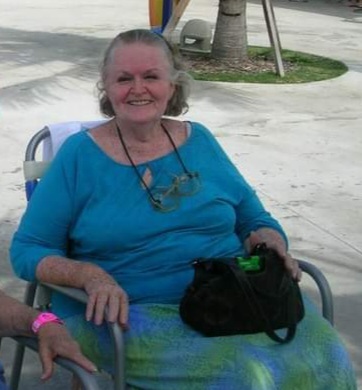 Paulette Sanette Loomis 75, of Crestview, Florida passed away Monday July 11, 2022. Paulette was born on August 28, 1946, in Hamilton, Ohio. After living a long life in southern Florida, she moved to Okaloosa County in 2007 and was a resident ever since.
Paulette enjoyed the limelight. Before becoming ill, she would, she would make appearances at local events around the Okaloosa County area singing songs and playing various instruments. Born in Hamilton Ohio the daughter of traveling evangelist minister Rev. Harrison and Evelyn Hornsby. Upon traveling around the country with her parents they purchased the house of famous burlesque actress Gypsy Rose Lee in Miami Florida where she lived for many years. She attended school and eventually graduated from Lindsay Hopkins in business management. During this time, she became a nightclub singer and was the headline act of the Fountain Blue Hotel on Miami Beach in the mid1960’s. She worked in several different things during her career, business management, bartender, drove truck and operated games for traveling carnival companies such as Big A and Deggeller Amusements. In 1997 herself, husband Arnold, and son Justin were the founding forces of the Loomis Bros. Circus a very popular show that still tours the country today. She was a resident of Crestview, Florida since 2005. She is preceded in death by her husband Arnold Loomis and stepson John Loomis. She is survived by her son Justin of Bushnell Florida, daughter Cerise of Crestview Florida, Stepchildren Mary, Jeannie, Arnold, Michael, Charles, Henry, and Louise. Eight grandchildren and nine step-grandchildren.

Express your condolences with flowers sent to Paulette Sanette Loomis

We are so sorry to hear of Sis Paulette’s passing. She was a sweet dear lady and will always be cherished. When my family and I went out to the nursing home to do church seeing her smile or when my Mawmaw was there we would see her and her sweet smile just her essence was always welcoming and sweet. She was a dear sweet lady and now she’s with Jesus singing like never before.

Cerise, just note to tell you how sorry Debbie & I are for the loss of your mother. We truly loved being her neighbor’s and spending time with her. Debbie just had shoulder surgery so we’ll be home while she recuperates. Much Love and Support, we’re always here if you need anything.

Mrs. Loomis was the reason the Loomis Brothers Circus has entertained thousands of folks over many years. I met her one Saturday morning when we had a Main Street Crestview event underway. She walked up to me and asked me if I remembered hearing her sing at her son’s circus earlier that year out at the Baker Arena. I had and I asked how I could reach her son. I called Justin Loomis the next week and that resulted in having the Loomis Brothers Circus in Crestview every November and the elephants and Circus Performers in the Veterans Day parades most years. Next time you take a moment to say a prayer of thanks for the lady who proudly brought the circus to Crestview.