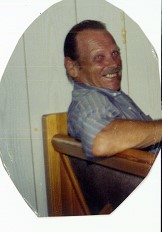 Robert “Bob” Douglas Healy, 83, of Nantucket Island, Massachusetts, unexpectedly passed on to be with our Lord and Savior December 5th, 2022. Bob was a resident of Florida since 1959 and became a resident of Mossy Head, FL in 1998.

Bob was a loving Husband, Father & Grandfather to his family. He was a faithful believer in Christ & an Ordained Minister.

Bob served in the United States Air Force and retired after 20 years, received his GED and continued education courses mainly the study of computers while serving. Bob’s favorite tour was in Turkey, which he spoke of often. His favorite things about Turkey were Turkish Teas and that every meal was served to you, already bite-size, so that you never needed a knife to cut your food. Bob was a Lifetime member of the VFW, NRA member, & Eastern Star/Free Mason member to name a few.

After retirement, Bob was a part-time security guard and had a side job, as a professional clown named “Zippo”. Bob had a love for computers, Turkish teas, gardening and helping people. He became a Master Gardener and created a website with Alice named: “Backyard Garden & Herbs”. If you knew Bob you knew his love for some of the following: Jalapenos, popcorn, ice cream, flan, homemade banana pudding, homemade bread pudding with lemon sauce (his mom’s recipe), motorcycles, “fast” antique cars & trucks, site seeing/backroad joyriding, weapons (especially old-style rifles), history books, music, and musicians such as: Bob Dylan, Tom Petty, Bo Diddly, & Joey & Rory to name a few. Bob enjoyed going to the park, the DeFuniak library, and certainly McDonalds! Bob loved to cook family meals in the crockpot and find new recipes to try online. He would watch all kinds of You Tube videos as a source of recipes and just as entertainment to watch old TV programs such as: “Carol Burnett & Friends”, “The Munsters”, “The Addams Family”, old Westerns and countless more.

Bob will always be remembered as a child-at-heart with our family. Every Wednesday was his personal “free’ day. Bob would go each Wednesday to McDonald’s, the library, the barber, lunch, and home. Soon after our move here in 2017 Cerina was able to join in!

“We went every Wednesday over the summer and over school breaks. We would walk around the DeFuniak lake from the library, talk about life, the future & joke, then find some ducks to feed and give them popcorn that we had made before we left home. Then sometimes we’d get food on the way home: McDonalds, Plateful Buffet, or Pizza Hut to get lunch for us and Grandma. His words were always ‘Let’s get some food for Mama-San’ which is what he called Grandma or Mama-Bear. On rare occasions, we would take Dusty, their Jack Russell- Chihuahua puppy with us. She’d sit with me, and I’d walk her around while Grandpa did his computer antics. Then, all 3 of us would walk around, getting some exercise and then head home to Grandma with lunch.” Between Bob and Cerina, there was always some kind of “prank war” going on. if anyone was in the way, you were always caught in the crossfire- from water guns, empty cardboard rolls, nerf guns, wadded up pieces of paper thrown at each other (at restaurants no less), a pie tin once (when Grandpa ate the last piece of pumpkin pie), and pool noodles too, that became “bonkers”!

These memories will forever be in our hearts and hopefully all your families’ memories too.

Bob, Dad, Papa-Bear, may you Rest in Peace, in the Glory of The Fathers Arms!

Richard and I are so sad to hear of this news. I never met Robert, but I know he was a good person, a great man and a true friend of my husband. Please know that he and his family are in our prayers.