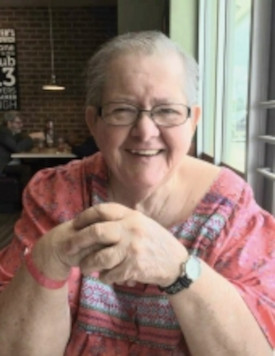 Shirley Louise Waggy, also known as Mama and Grandma Waggy, went on to be with her Heavenly Father on December 4th, 2021. Shirley was surrounded by her 4 children when she exhaled her last breath and walked through the gates of Heaven to be welcomed by Jesus Christ her Lord and Savior. Shirley was born on February 21, 1942, in Jessup, Maryland. In 1960, Shirley married Marlyn Waggy Sr. and instantly became a supportive military wife and mother. Both Marlyn Sr. and Shirley called several states home, including one overseas assignment in the Philippines. Their final military journey concluded at Eglin AFB where she found her calling to love and care for the elderly where she provided her infectious smile and hospitality daily. For over 30 years, Shirley worked at the Crestview Nursing and Convalescent Home, now known as Parthenon Healthcare of Crestview. Shirley regularly attended Southside Baptist Church and was a professing believer and avid follower of her personal Lord and Savior, Jesus Christ.

Shirley is survived by her 4 children: Loretta Ayala, Marlyn Waggy Jr. and his wife Nancy, Lynn Milligan and her husband Danny, and Wayne Waggy. She leaves behind a legacy with 7 grandchildren and 12 great-grandchildren. She is preceded in death by her Father Harold Keeney, Stepfather Lester Carter and mother Elizabeth Carter. Also, her sister Julia Lynn Smith and her daughter-in-law Carolyn ‘Tina’ Waggy. Shirley will be missed, but to know that she is looking upon the face of God now gives great peace and comfort to those who loved her. This is not a good-bye service, but a ‘see you later.’

Service will be held at Brackney Funeral Service Chapel on Thursday, December 9th, 2021, at 11:00am with Brother Bill Nester officiating. This service will allow the opportunity for anyone to mention a fond memory or story of Shirley. Burial to follow at Old Bethel Cemetery – 5778 Old Bethel Road Crestview Florida. All are welcomed to share in this joyous occasion to celebrate the life of Shirley Waggy.