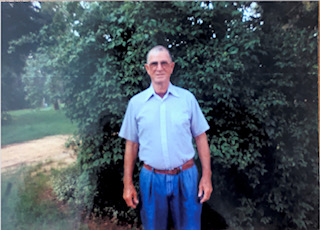 Thomas (Tate) DeWitt Jennings, 87, passed away October 21, 2022 at home in DeFuniak Springs, surrounded by his family. A lifelong resident of Northwest Florida, he was born in Niceville. He spent several years as a youngster in Gonzalez, FL, where he attended Tate School where he earned his nickname “Tate”. He graduated from Choctawhatchee High School. Tate met his wife of 68 years, Beverly Marshall Jennings, when they were teenagers. They had two children, Cynthia, and Thomas (deceased), one grandson and three great-grandchildren. Tate owned and operated a construction company for many years, primarily in Northwest Florida. He was a long-time member of the Church of Christ. Devoted Christians, Tate and Beverly made missionary trips around the globe including Honduras, Ecuador, Trinidad and China.

A memorial service will be held 2 pm, Friday, October 28, 2022 at the Niceville Church of Christ.

You will be missed Tate. Our thoughts and prayers go to Beverly and the family.

We are sorry for your loss Beverly. Many fond memories of Tate and you. Our love, Mack and Ann

Tate my children always adored you and Beverly. Y’all were always so supportive of my family and we have enjoyed some great times together. I remember our family trip to Disney World in our station wagon with y’all. The suitcases were strapped on top, yours must not have been secured because it came off and strewed you underwear down the highway. All we could do was laugh and gather all your clothes up.
We had such fun going out to eat and playing cards together.
Beverly my heart hurts with you. You and Tate are a beautiful couple. I pray that you can fine peace and comfort in the wonderful memories. You both were always such a blessing in my life. I love you.

Beverly so sorry for your lost. I’m praying for you and the family.

Beverly and Cindy. All the years y’all picked us up for church in the 60s-and 70s on the baby blue convertible. And just a month ago y’all brought me honey. I am honored to be a part of our history. He is well in our heart, he is still here. Y’all are in my prayers.

I was so sorry to hear about Tate’s passing.Beverly and Cindy-I know you will miss him.Y’all are such a part of my good memories growing up. I am sure he is having a wonderful time in Heaven.We will see him again someday.❤️