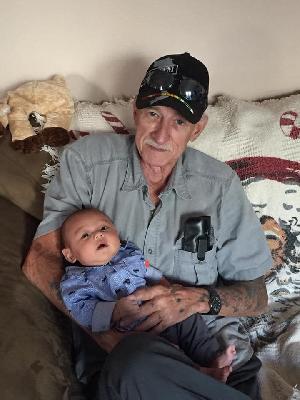 Thomas â€œTomâ€ Carney III, 72, of Crestview, Fl, completed his final ride in his journey of life, on April 10, 2020 peacefully at home with loved ones surrounding him, after a long battle with cancer.

Tom was born on December 11, 1947, in Cedar Rapids, Iowa, the son of Thomas II (Pinky) Carney and Alta Waterman in Cedar Rapids, Iowa. He served in the U.S. Army from Oct 1968-Oct 1974. He was in the jungles during the Vietnam War as â€œThe First Team, which led to nobly receiving a Purple Heart and eventually an Honorable discharge
He was a motorcycle enthusiast- in his younger days, always had his Harley in his living room every winter, taking it apart and getting it ready for the next yearâ€™s ride.
Tom was an excellent builder and could fix anything that was broke. He was a man that if you needed help, he would never hesitate to stop and lend a hand. He often threw tools, cussed out what he was working on, but stubborn as he was–would successfully complete the task!!
Tom had 2 big dreams in his life and achieved both of them! He opened up his own Restaurant in Iowa, and ran it successfully as the cook. Winters started taking a toll on him and he moved to Florida. He completed his second goal by opening up Eagle Customs Motorcycle Repair shop in Crestview until his retirement. One of his many daring adventures was riding his Nitro Methane Drag Harley in the Emerald Coast Bike Fest.
Tom was preceded in death by his parents, â€œPinkyâ€ and Alta, and his brother, Gary.
Survivors include his children: Dawn, Dalin, Thomas IV (TJ) and Autumn; Brothers: David and Tracy; Sister: Kathy and his ex-wife/buddy, Shari. He was a loving â€œPop-Popâ€ to 10 grandchildren.
The family would like to extend a special thank-you to the 21st Oncology Center, who helped make this last journey of Tomâ€™s an easy road to travel down.
Tom always liked holding Fish Fryâ€™s, so A Celebration of Life Fish Fry will be held at a later date.

The Three Musketeers will keep Tomâ€™s memories living on forever so his ride will always be in our hearts.

You are loved and will be missed! Rest In Peace Tom. Condolences to the family.

Oh,this really makes it so FINAL. I pray for strength and love to all who knew Tom. May we all get through this hurt and pain and reach out for each other to get through those “Really Bad” days. Love y’all and take care, Three Musketeers.

Kim Emberton (I love loved Tom like my Uncle)

I knew Tom for many years.. I spent most of my time at his bike shop with my dad watching them work on bikes till their knuckle bled.. My favorite part of the day was closing time. When we would ride the bikes into the back of the shop, then sit out front shoot the shit tell me about midnight then go home. Talk about anything and everything that came up.. Good laughs crazy arguments best of all spending time together. Tom was a wonderful man to me and my family..I’m going to miss him dearly.. Ride High and remember no skid marks in heaven!!!

Dearest Autumn and Family our deepest condolences. We loved Tommy so much. I know how hard this is for you. He is at peace and at rest after all he has been through. He is with you and your family as I feel he is also with my family. Tom is a Guardian Angel with all his family that is in Heaven with him.Tommy was so loved.and that love will live on in our Hearts knowing he is watching down on all his family. With much Sorrow and love for you and your family.
With much love Karen Melsha Duette.âœï¸ðŸ™ðŸ˜ª