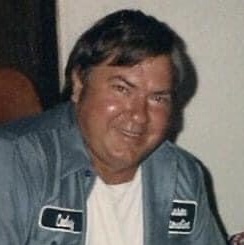 William Cody Johnson. age 78, of Crestview, Florida passed away Thursday, October 20th, 2022 surrounded by his daughters. He was born June 13th, 1944, in Laurel Hill, Florida to Clarence Cody and Myrtis Marrow Johnson. Cody was known for being a local mechanic owner of Johnson’s Automotive. He had a passion for racing, going fast, winning, and building his C.I.D. Big Johnson Racing Engines. As a young man, he was behind the wheel drag racing a 55′ Chevy named Gangrene. He then transitioned to mud racing (the legendary Gold Miner) and circle track. Over the years, he built engines for too many to count. He was best known for his transmissions and carburetor work. Later in life, he started machining his own pieces to achieve perfection. He was a teacher who loved to share his knowledge with anyone who had a passion to be the best. He was loved, respected and feared by many.

Cody is survived by his daughters Becky Okarmus and husband Chris, Tracy Ward and husband Allen both of Crestview. He is also survived by his sisters Vioma Miller and Oleda Rembisz of Defuniak Springs. He is preceded in death by his parents, his sister Elizabeth Johnson, brother John P Johnson, Ex-wife Marianne Register Johnson, half sisters Eloise J Ulrich and Emma Jewel Carlton, all of Crestview. His grandchildren are Alexis Arnett Crawford, Hunter, Holden, and Holly Ward. Great Grandfather to Isabella, Ameila, and Sydney Crawford of Crestview. As well as numerous nieces, nephews and friends.

Gerald and I have fond memories of the racing days. Cody ways a good man and had a good sense of humor. He will
Be missed by all who
Knew him. He is at peace.

Rest in peace my friend and smooth rolling on your final Race West.

Cody you were my uncle although we were only 5 months difference in age, like brother and sister when we were little. Didn’t see you much after we grew up and I moved away but I thought of you often. You will be missed greatly. We both shared the drag racing gene. Love you.

I remember Cody well. He was the best mechanic in town. I remember the mud racing days well. My boys loved the Gold Miner. When one of the guys tore something up they would all gather at Cody’s shop while he fixed it. He could fix anything. The guys gathered at his shop just for the friendship and the Busch beers often. All the women knew where their man was when he went missing. It’s sad how so many of them are gone now. Cody was a friend to so many. You were indeed lucky if you were his friend. Rest easy Cody. You will be missed.

Mr Johnson was a dear friend of mine and to many others and will truly be missed. He tought me several different things about motors and building them as I have often helped him in his shop learning from him 🥺I did a painting for him 2 years ago with a race truck I drew and it said Johnson’s racing rest in heaven my friend till we meet again

Friend of Cody for many years like so many other. Lot of circle track memories. I knew I wasn’t the best driver but also knew I would win races with a Johnson engine under the hood. He helped out a lot of racers throughout his career. We always stayed in touch with one another. Rest in peace my friend.
PS. Sorry I’m out of town and want be at his funeral!! Love all !!

I am so sorry to hear of Codys passing . I knew him from a long time ago when they dragged raced in Pensacola, I think I only seen him one time since then , when he lived in Pensacola, but I never forgot him . RIP Cody

Great man, an great memories before a lot knew him. Back in the 70’s when he was in the hub city four wheel drive club. His cb handle was Marsel. The old orange blazer. Thanx for a lot of great memories old man. Fly high ole boy